Did some more research and eventually found out that this is not a Visual Studio issue. Apparently, to open rptproj files with Visual Studio, you need to install the corresponding Microsoft SQL Server Data Tools – Business Intelligence package. Would not have figured that out had it not been for this post.

So I went here to download the SQL Server Data Tools BI package. Installed it. And now I can open the SSRS solution/project in Visual Studio 2012.

For some reason, maybe because I accidentally pressed something on my keyboard, Visual Studio 2019 started comparing code in inline mode. By inline mode, I mean I only got one code comparison window, and the changes were stacked on top of each other. This made it hard for me since I was so used to the side by side code comparison mode, where I had two windows and I can clearly see what's different between files.

It took awhile for me to figure out how to set it back. I spent some time looking through the options in Visual Studio but couldn't figure it out. I even had a hard time searching the internet for answers, because I wasn't sure what to search for. The search key that finally worked for me was “vs 2019 diff inline mode”. That led me to the Stack Overflow post I linked below.

How to switch view modes in built-in Diff viewer of Visual Studio 2012 and 2013?

Where to find the WCF TestClient Application

When you just want to do a simple WCF service test, you don't need to download third party tools. You can use the WCF Test Client app that usually comes as part of a Visual Studio installation. I keep forgetting where to find it, so I'm writing it down on here to remind myself.

I had Visual Studio 2017 installed on my PC. Here is where I found the WCF Test Client app (WcfTestClient.exe):

Was running into a build error in Visual Studio 2017. The Output window says 1 project failed, but the Error List window was empty. The only way I managed to figure out what project was failing, was to copy the contents of the Output window, paste it into Notepad++ and search for the word “FAILED”.

Anyway, I finally figured out that it was the SQL database project that was failing to build. And it turns out, it was getting an “Out of Memory Exception”. Not sure if this specific error causes the Error List window to come up empty. In any case, at least now I have an idea of what to look for whenever this happens again.

So, I looked up the error message and every Stack Overflow page I ended up on, says that I have to set the Language Version in Visual Studio. Okay, so how do I do that? I eventually found this answer, which gives you the steps to get to the Advanced Build Settings dialog box for the project.

When the dialog box showed up however, it didn't give me an option to set the Language Version. 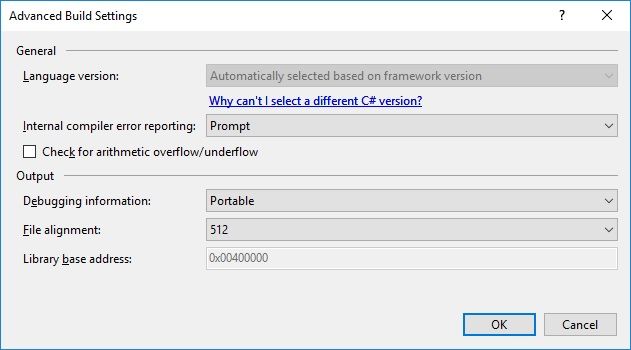 The solution I ended up with involved manually editing the project file and adding an entry for the Language Version. So, I opened up the Miniblog.Core.csproj file and added <LangVersion>preview</LangVersion> under the <PropertyGroup> settings. It looks like this: 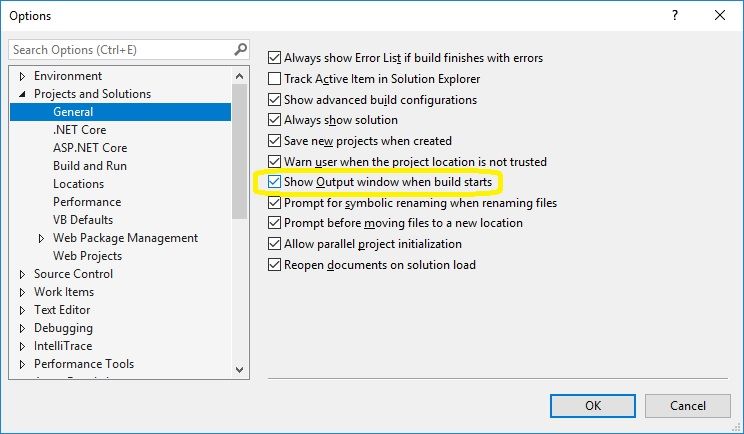 Today I ran into an issue where I was trying to debug an application and I was getting a “Breakpoint failed to bind” error on Visual Studio 2017. I was trying to attach to the process when I got the error. I was already running in Administrator mode, so it wasn't a permissions issue.